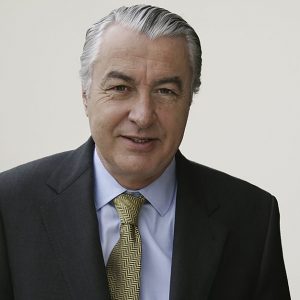 A highly regarded journalist, Lalo Azcona worked in Spain’s national public radio and TV service from 1969 to 1983 developing a series of key roles ranging from reporter, radio and TV news anchor, editor and editor-in-chief, becoming one of the most popular and respected journalists and news anchor of his time. He was also a contributor to a number of newspapers and weekly magazines. In 1983, Lalo decided to focus his professional activity in the field of communication and business management.

Lalo Azcona is a founding partner and chairman of ESTUDIO DE COMUNICACION. He is also chairman of the board of Oviedo University and chairs the Azcona Foundation, aimed at promoting the Spanish art and Spanish artists.

Prior to this, Lalo was chairman of international IT company TECNOCOM. He has also been board director at several companies including INYPSA, an Engineering company present in ten countries and listed on the Spanish Stock Exchange. He has also been part of the boards of ARCO, Canary Museum and Reina Sofia Art Museum.