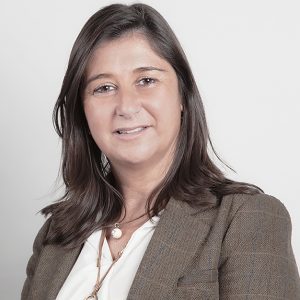 Marta Mimoso holds a degree in International Relations with a Master’s degree in Communication Sciences from the Institute of Social and Political Sciences, Technical University of Lisbon. She has more than 16 years of experience in Press Consulting and Media relations and more than 12 years of experience in Business, Corporate and Public Relations. She has been the General Director for the Office of Estudio de Comunicación in Portugal since 2004. She coordinates all of the Group’s activities in Portugal, in close collaboration with the headquarters in Madrid.

In the performance of her duties she has designed and supervised complex communications strategies in different sectors. Specialist in crisis and financial communications, as well as in the design, management and coordination of public relations and relations with the Media.

She has also been part of the Office of the European Parliament in Portugal, where she coordinated public relations actions as well as the design and development of brochures and promotional material. At the Expo 98 in Lisbon, she joined the European Union Pavilion team as Head of Press and Public Relations, supporting all official events and public relations activities of the European Parliament in the EU participation at the Expo’98.

She speaks several languages: Portuguese (mother tongue), Spanish (Higher Diploma of Spanish as a Foreign Language of the Instituto Cervantes in Lisbon), English (Proficiency in English of the British Council in Porto) and French.